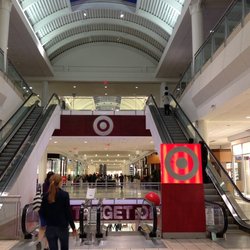 I sadly only made it to day three in my experiment to go out into the world sans makeup. I was on a good run, until Target brought me to my knees. The thought of cruising the aisles and facing the judging eyes of all those strangers was just too much for me. It doesn’t help that this particular Target is attached to one of the larger shopping malls in our area and I needed to go to more than Target that day, namely Sephora, and I don’t dare set foot in there wearing anything less than primer on my worst day.

Target in a mall. Sooooo convenient!

I have always been self-conscious…cripplingly so, in fact. I have never really believed anyone when they tell me I’m pretty and it has affected more than one relationship negatively enough that you would think I’d be able to snap out of it. [Cue Cher]

I would seriously hire her to follow me around and let me just point to people so she could do that all day.

I experience what I refer to as “moments of pretty.” These are those brief flashes of raised self-esteem that come quickly and only hit when I catch a glimpse of myself in the mirror and I am either caught to off guard to pick at myself mercilessly or I am feeling so great that the stars align and my mood and my wardrobe have given birth to this incredible moment of satisfaction that until then only Ben and Jerry’s Half-Baked FroYo can provide.

I am more aware of it now as I watch my daughter become more aware of what is going on around her and starts to have favorite clothes. She’s very into hearts and Hello Kitty. BONUS if it’s hearts AND Hello Kitty. She also likes to watch me do my makeup in the mornings and asks to “do brushes, Mommy.” To placate her and to keep my morning moving forward, I have a little set of extra brushes that have never been used that I gave to her. She brushes her hair with them, so I know I don’t have to worry she’ll wake up one day demanding to raid Sephora.

What I do worry about is what I am going to say if she asks me why I wear makeup. The only thing I can come up with is that I do it to look pretty, but even that’s not really true. My mom calls it “putting her face on.” My dad used to call it “getting ready for battle.” I’ve gone from also “putting my face on” to “going under construction” to “getting my armor on.” I’ve also gradually realized it’s not so much about looking pretty as it is about feeling pretty. I vaguely remember when I was allowed to start wearing makeup and lots of discussions with my mom about what a whore looks like, especially cheap ones. Apparently, they all read Seventeen magazine. It was also the age of Madonna, I didn’t want a shirt that covered BOTH shoulders and Boy George knew how to do his eye shadow better than I ever did. He probably still does. But I digress…

I hope like hell that my daughter has more self-esteem than I do, but I am bracing myself for the big why on this one. I don’t want her to think that she needs it like I do. I want her to decide if she wants to wear it and know that if she does, it’s only emphasizing the beauty that is already inside and outside of my sweet baby girl.

I will try again. It will take time, some exfoliation and maybe a mask or two, but I’ll get there. Baby steps, right?