A couple of weekends ago, we visited my sister-in-law and brother-in-law for a playdate with my nephew Mr. A. They have a million miles of land just north of metrowest Boston with wildflowers and a path down to the creek just out back, so I can pretend it’s the country. It also means they can do things I’ve been wanting to do for years, but may never have the time or the physical space to attempt. One of those things is a lovely little organic veggie garden. They grow corn, bell peppers, cucumbers, pickling cucumbers, jalapeño peppers, watermelon, beefsteak tomatoes, indigo rose hybrid tomatoes and Italian sweet peppers.

Trust me, there are tons of purple tomatoes on that big plant back there and at least three watermelons beyond that.

Because they are lovely people, they shared some of their bounty with us and sent us home with some jalapeño peppers, beefsteak tomatoes, Indigo Rose Hybrid tomatoes and one of the largest green bell peppers I have ever seen.

My in-laws are clever people and very good at repurposing old things into new things and so I should not have been surprised at all by what I found when I opened my neatly packed bag of goodies. I don’t know who gets the credit, but I found they had found a way to protect all the smaller tomatoes in transit. It turns out they are the perfect size for an egg carton! There were a dozen brilliant little tomatoes completely unharmed. I’ve seen this trick for holiday ornaments, but it ever occurred to me to put my tomatoes in one. 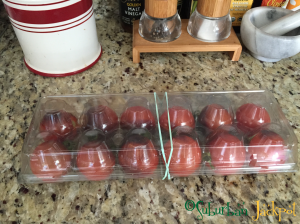 This particular carton has little holes everywhere so they can breath. It also got recycled, so let’s not get into it over plastic, ok?

It’s a simple thing, but it was completely brilliant to me and I shall be  using the idea if I ever get around to my way smaller version of their garden.