Miss O finally turned seven this past week. It feels like we’ve been celebrating for months, which we have, because our events have been so disjointed and spread out this year. I’m all for an ongoing celebration, but this felt like it was getting out of hand. I’m already accused of being excessive when it comes to birthdays, but you’re only seven once, ya know?

First, we suffered the loss of the Boston-area American Girl Store and rushed to do an in-store birthday lunch and shopping day so we could check that off our wish list and give Miss O the opportunity to pick her own American Girl doll. That was somewhere back in March.

Then we spent the weekend at my mother’s so she could reveal her gift of our trip to France and England this summer. We were all pretty sure Miss O would have a hard time waiting, so we held off telling Miss O until closer to the trip. The timing lined up fairly well with Miss O’s birthday, so even though it wasn’t meant to be a birthday present, it became one. That was in May, two weeks prior to Miss O’s actual birthday.

In our house, I like to celebrate birthdays as long as possible, because really, you only get one birthday a year and I believe it should be the best possible day that year. To get it started off right, we do family celebrations in the morning. The night prior to the actual birthday day, I stay up to decorate the dining room and sometimes our front room. Due to Miss O’s newfound love of Harry Potter, this year’s theme was pretty easy, so I did my best for a low-key, low budget, Hogwarts vibe.

One of my favorite things about Hogwarts is the iconic ceiling in the great hall. There’s no way I have the time or energy to make our ceiling look like the sky outside, though given the time and no other commitments, I would totally do it. I can however make floating candles. If you have battery operated tea lights, paper and some fishing line, you’re all set. Our chandelier is already the faux pillar candle style, so it fit right in.

For a centerpiece, I went with simplicity and stacked our copies of Tales of Beedle the Bard, Quidditch Through the Ages and Fantastic Beasts on top of the Old Readers Digest Fairy tales book my mother used to read to me. The cover is done in a similar style so it was the perfect base. I was going to make some more textbooks, but stopped at one after I realized I didn’t really need them. We have a simple black cauldron as part of our regular Halloween décor, so I borrowed that to sit on top of the books and dropped some LED fairy lights in for a bit of a glow. 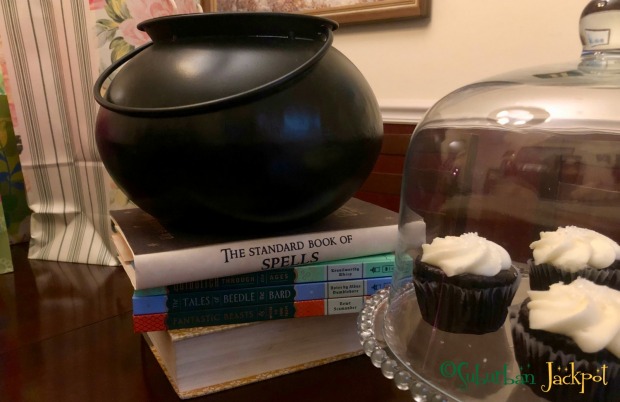 I love decorating the sideboard for each season and birthdays are no different. I went for a hodgepodge of “magical” looking things surrounding this cheeky photo of Gilderoy Lockhart. I found it in my inspiration search and I laughed so hard I had to use it. Miss O loved him in the movie so I thought I’d see if I could get a chuckle out of her when she saw it. I set out some candleholders I use around Halloween and added some small pyramids that were souvenirs from my parents’ trip to Egypt. We have a few knick-knacks that when grouped together have sort of a wizardy-vibe and worked pretty well. Miss O got a snitch necklace at a fair, which was a perfect addition to the vignette.

I printed the house banners and placed them around the room, just one of each, since I was trying to keep it from getting to be too much and used an old pirate-style Happy Birthday banner I made for a previous birthday. The font and parchment paper combination worked brilliantly. As a final touch, purely because I couldn’t leave it alone, I found a photo of Professor Dumbledore, printed it out and put it on the mirror opposite Miss O’s seat.

Hubs and I also got to go in to school on Miss O’s actual birthday and read two books aloud, as is the traditional birthday acknowledgement in their first-grade class. Hubs did an awesome job reading Waiting is Hard, by Mo Willems and Miss O surprised us by wanting to read a book aloud to her class, too. She chose Scaredy Squirrel, by AUTHOR, a story about a very paranoid, but well-prepared squirrel who finds out that sometimes, plans don’t work out quite the way we think they will. It’s a great book for kids with anxiety. She did an amazing job reading and I could not be more proud.

After all that, we still had a birthday party with her friends at one of her favorite places on earth, Jump On In the weekend after her actual birthday. If you’ve never been, it’s basically two warehouse-sized rooms filled with bouncy houses, that the kids rotate through, ending in one of two party rooms with tables and a kitchenette. One bouncy room can also be turned into a glow party, which is essentially a kid-friendly rave with glow necklaces, huge glowing spinning light ball, and utter chaos in the dark. Despite the chaos, and expense, it’s a pretty great party. I don’t have to really think about or do much of anything. I book the time, order pizza through them, add a glow option if I want, bring the cake, any other snack food (usually fruit, chips, drink pouches and bottled water) and the party favors and I’m done. They set the room up, serve the food and I can spend time mingling amongst the parents I hardly have time to see while our kids go crazy and get tuckered out.

Usually that’s a wrap, but this year we have yet another celebration at Miss O’s grandparents’ house the weekend after her birthday party weekend. I’m still not sure why, but whatever. That will bring the celebration count to six events and then we can finally be finished.

It’s truly exhausting and I’m dreading the expectations for next year. I know we didn’t mean for this year to get crazy. We had some special circumstances that required some separation. I can manage Miss O’s expectations, but it doesn’t make it any less daunting when you have to push back against an almost eight-year-old expecting a month-long string of celebrations. I’d rather go back to doing two parties, one for her classmates and friends and one at home for family. It was more work, but it kept the festivities aligned and more under control.

Miss O is already asking for her party to be at Jump On In again, so at least I won’t have to think about that. She’s probably also working on her theme and her guest list. She does love to plan events and she’s wicked good with a checklist. She’s got a whole year to figure it out. For now, I’ll sit back and look forward to whatever seven will bring.