I have yet to meet the parent of a toddler or preschooler that can tell me they took less than 20 minutes getting their offspring out the door even close to what “on time” might look like. Miss O is no different than her peers in this regard, especially when there is a choice between Legos and brushing her teeth, but we may have finally found a chink in her tiny armor and it looks like this:

There are tons of chore charts, contributions jars, etc, etc, etc on Pinterest and I have looked at almost all of them. Seriously, I have endured migraine worthy eye strain dissecting each one trying to determine what is best for us. First, I wanted something Miss O could interact with and feel like it was something she had control over or could “be in charge” of.  Second, she doesn’t read yet, so I needed it to be simple enough for her to recognize what I was trying to communicate. Third, I wanted something that could live in a central area of our home, but be easily accessible for a 3-foot tall preschooler without climbing on or in anything to get to it. It took a while, but I finally blended a few ideas together and, surprisingly, so far it’s been a huge help for our mornings.

First off, we call them what they are, “things you need to do in the morning/at night.” She’s three, so she doesn’t really question whether they are chores or contributions and neither do we.  We just want her to do them and make them habit with as little debate as possible.  My baby thrives on routines, so we are lucky that she has no problem knowing there are things she has to do. It helps that she knows Mommy and Daddy have things we need to do as well, so not only is she not alone in having to do things, she’s not left out of getting to do things. She has a few “Miss O jobs” as well and she loves that these are things she is responsible for. In fact, if you even attempt to touch a napkin on most nights, she’ll remind you very quickly that’s her job, thank you very much.

So now that we decided what they’re called, I had to figure out where the heck we were going to put this thing. We decided on the kitchen pantry door, since the kitchen is really our hub for doing just about anything and it’s right next to the front room, where most of Miss O’s upstairs toys live.  It’s also out of the main path enough that she and one of us can check it without getting in someone else’s way. We have an IKEA Besta pantry we bought a few years ago and the door has three stacked rectangles.  Each of these is roughly 17″ x 20″.  Based on her height, we chose the center and I began the hunt for whatever would hold this amazing new system.

Before I started looking for equipment, I figured I should really isolate what I thought worked and didn’t work for us with my many pins and craft our solution from there. As I mentioned earlier, Miss O can’t read yet and that was an important driving factor. Pictures it is!  She is incredibly independent (did I mention the napkins?) and is far more engaged if she feels like she has control of it, so I wanted something she could manipulate on her own at some level and I wanted something easy so it would become habitual and not a chore in itself. That’s when I landed on the magnetic versions I kept seeing. She already understands how to use them and that’s way less messy than trying to get her to check something off with a write and wipe pen.  Not to mention safer for my pantry door and everything around it.

Thus began my hunt for pictures that would cover the bulk of what I might ask her to do and be descriptive enough to communicate what the task really is. I’m not talented with drawing or patient enough to figure it out and I like things to be better than I can do them, so I chose these lovely free images complete with to do >> done header, by Audrey Schilaty, who is an amazing illustrator. 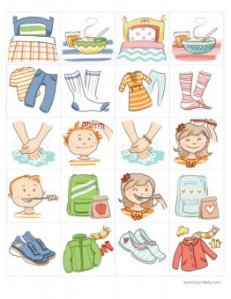 Her illustrations are clear enough that Miss O knows what they mean and they’re interesting enough that they engage her attention. Her blog is also darling, so give it a look while you’re there, won’t you? I don’t think she still maintains it, but she has some really cute ideas and darling illustrations. I downloaded the free printable, printed them, cut them all out then laminated them at work. We’ll add that laminator to the employee benefit category and move right along, shall we? Laminating wasn’t really necessary, but I’m hoping it helps extend the life of the cards. You could just as easily not laminate them or sandwich them between two pieces of packing tape and trim them to size. Clear contact paper works great, too.

The result is a neat little square that is durable and clear.  I bought some adhesive backed round magnets at Michael’s, one package of 24 was around $3 in the glue aisle, and stuck one on the back of each laminated square. They are small enough for Miss O to handle and big enough to see the picture clearly.

Next came the magnetic board.  I wanted something that would fit in the space without overwhelming it or being too busy. Fortunately, I found this fantastic 12″ x12″ square white borderless magnetic write and wipe board at The Container Store when I was visiting my mom.  Bonus: She bought it for me! along with a skinnier version that is 5″ x 15″.  I figured the skinny one could hold all the magnets that weren’t on the “active” to do board.

I had some cute washi tape on hand (seriously, what can’t you make cute with washi tape?) and I put a strip right down the center of the board to create one side for “To Do” and one side for “Done”.  So easy! I attached the boards to the pantry with two large Command picture hangers each and they were ready to go.

We started off slowly with a few things Miss O already does, like brush her teeth and get dressed.  After she got the hang of it, which was all of one day, we added in things like going to the potty, washing her hands, and picking up toys. It has been a huge help transitioning Miss O from breakfast time to getting ready and then playtime. She now knows that we check the board after we clear the breakfast table and do as many things as we can before playtime. Bedtime is still a struggle, but that has more to do with the fact that she’s a cranky three-year old and she does NOT want to go to bed. Baby steps, right?

I did not end up using the skinny board for the extra magnets, since I found it distracting for Miss O to have all of them up all the time.  I keep them in a little box on our kitchen island across from the pantry where I can get to them easily. The skinny board became our weather and feelings board, which you can see, sans emotions portion, in the pic above.

Miss O loves changing the weather cards I got from learn create love and I gave them the same lamination and magnet treatment. I have found these help her understand why we tell her it’s not a great idea to wear her winter coat when it’s 90 degrees outside or why she needs sunblock when it’s a beautiful, sunny day. We haven’t tried the temperature one yet, but that will come in handy in future, I’m sure. 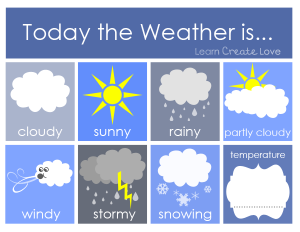 I also found a great emotions memory game from ARTiculation360 that I made into magnets as well so Miss O can show how she’s feeling. These are better than a previous version I found that were different colored circles with expressions I found to be a little too close to each other for her to distinguish what they actually were.  I like that they have text for when she gets a little older. These have been great at getting Miss O to talk about her feeling with us and I love that she is becoming more aware of how she feels and what’s making her feel that way.

What’s not pictured is the “Today I feel…” sign I made that’s similar to the “Today the weather is…” sign that’s included in the weather printable that you’re welcome to download if you’d like. It’s nothing fancy, but I felt like I needed something to tie it all together .  Miss O’s current favorite colors are orange and pink, so since I ended up with a blue and orange theme over there anyway, that’s why it’s orange.

I hope if you try this, it helps you as much as it’s helped us. At some point, we’ll have to upgrade it and I’ll have to breakdown and make some new magnets for ones that aren’t represented in the current batch, but it’s pretty close to perfect for now and that’s nothing to scoff at in our house.