I find traditions sneak up on you. They’re not often planned, but happen without you realizing they’ve grown beyond a repeated event and become something anticipated or cherished. Some take longer than others to develop this status and others barely finish before you know they’re part of who you are. This was the way of our Christmas since moving to the Boston area 11 years ago.

When we decided to move, it was for Hubs’ job. We had no real ties to the area and apart from a deep fear of blizzards and living in an urban environment, and I had no expectations of what life in Boston meant. I was born in Washington, D.C., but most of my life was spent in a suburb of Northern Virginia. I have fond memories of visiting the Smithsonian and National Mall at Christmas to see the decorations and participating in the frenzy of not knowing what to do when an inch of snow falls and the Metro shuts down. I wasn’t ready for multiple feet of snow and watching hockey.

Fortunately for me, when we decide to do something, we go all in. Our first winter was light on the snow and heavy on the wind chill. I learned the difference between gloves that are pretty and gloves that are warm really quick. We were fortunate to have a warm apartment with a balcony offering beautiful views into the woods behind our building that felt a little more like home when it snowed. I started taking what has become an annual photo of the first snow out our window.

Our cat Beans was with us then and she gradually got over her anger at being moved to such an unworthy place for a feline of her stature. She took to sleeping underneath the tree the second we put it up and thus began our annual game of spot-the-kitty during the month of December. 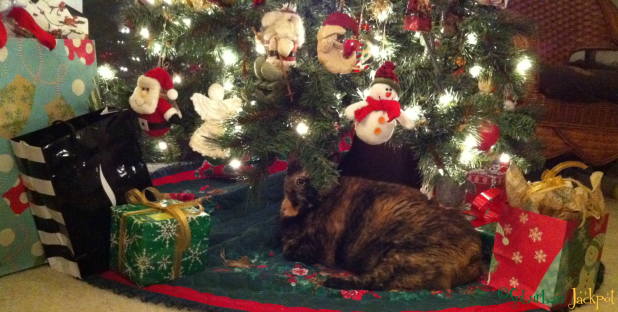 Even though I’d been away from Virginia for more than ten years, I started to miss home more and more. Perhaps Massachusetts was too much like the wooded suburb I’d been a part of for 21 years. Boston proper reminded me of old-town Alexandria and Georgetown, with its brick-lined streets, boutique shops and tiny restaurants. Newbury Street at Christmas is almost identical to Georgetown when draped in greenery and lights.

I’d make gingerbread houses each year, as I did with my mother. I’m not talking about these new kits you find everywhere nowadays. These are made from scratch. Real, honest to goodness gingerbread. It involves a multi-day process, hands sore from rolling out dough and burned fingers from scorching hot sugar “glue.” It’s not an activity for the faint of heart. I still decorate them the same way my mother showed me some 40-odd years ago. I roll my eyes at my husband’s more and more outlandish creations each year and struggle between allowing Miss O creative expression in her decorating and teaching her the “right” way to do them.

For the record, the one in the middle is the “right”way.

I didn’t make them the houses year. I caved to the temptation of a kit in Wegman’s. To be fair, Miss O chose a dog house, so technically, I haven’t given all the way in, but I do regret it. Whether anyone eats them or not, they’re a part of our holiday and we look forward to them each year. Though only aware of the houses for a few years, the hunt for the perfect candies has permeated the holiday for Miss O. Just this year she spotted some decorative chocolate pearls in the baking section and declared them “perfect for lights on the houses, Mommy!” I have to admit, they did look amazing on the dog house. It made me miss the houses. I don’t think I realized something was missing about Christmas until then. I won’t forego them next year. 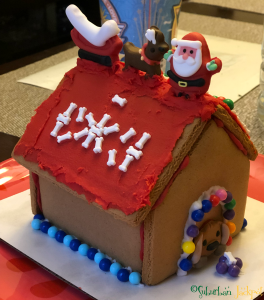 We’ve added new traditions as well. The weekend of Christmas eve, we went for our second time to the Christmas Celtic Sojourn at the Cutler Majestic Theater in Boston. It’s a lovely celebration of the holiday through Celtic music, stories and dance hosted by Brian O’Donavan, on his own a Boston institution. Since Hubs began working at WGBH, Boston’s local public media station, we’ve been invited to the show. We finally accepted last year, after we stopped traveling for the holiday and Miss O became old enough to sit through a show.

It’s a beautiful night and if you’re ever in the area when it’s running, do try to go. The performers are incredible and the smaller theater gives the impression of sitting around the hearth in Brian’s home as a few friends drop by for a night of true merriment. Between the traditional carols and the energetic fiddling, the music reminds me of home and going to vespers or lessons and carols each Christmas Eve. We don’t go to church up here – a story for another time – so it’s become my new celebration of the season in that way.

The brisk walk through Boston Common, with all the lights and music drifting over from the Frog Pond skating rink, have become part of the experience I look forward to. The Common is beautiful all dressed up and we walk a little farther than we have to just to go and see the tree, even though most years we’re not wearing gloves that are ever warm enough. Now we get a photo of Miss O in front of it, because it just seems right.

Hubs and I have made a new life for ourselves up here and, while I still get nostalgic for Christmases in Virginia, these are the celebrations Miss O will come to know as tradition. This blending of old and new has crept up on us, making something entirely new and I wouldn’t have it any other way.

As we look toward the new year, I am so grateful for all we have and have come to know. I hope for a peaceful and uneventful year to come. OK, maybe we can have some events, but let’s hope they’re more up than down.