Hollywood Studios presented an interesting challenge for our first family trip to Walt Disney World. It’s not a park that has ever held a lot to grab my attention, so I was a little concerned it wouldn’t do a whole lot for Miss O. She was still pretty entrenched in her love of Star Wars, but her past experiences with StormTroopers at our local zoo did not go well. With her definite lack of interest in costumed characters at the other parks, would there be any characters there to hold her interest?

Don’t get me wrong, there are plenty of characters to meet at Hollywood Studios, but most of them are not “face” characters like the Princesses we met at Animal Kingdom, Magic Kingdom and Epcot. Miss O hadn’t shown any interest in meeting Mickey, Minnie or any other fluffy favorites, so I wasn’t planning on pointing any of them out.

As we were waiting for our family to meet us at the front entrance, all that changed the second Miss O saw Daisy come out. I could have never guessed how hard Miss O would fall for Daisy, but she’d spent the last three days hugging every Daisy plush in any store that had one. I couldn’t help it, but all it took was a gentle, “Do you want to meet Daisy, Sweet Pea?” and Miss O was the second kid in line. After meeting all those Princesses, Miss O was a pro at meet and greets, but there was no doubt she was completely star struck over Daisy. She had a lovely interaction, we got another signature on our autograph banner and Miss O is forever a Daisy girl. Who says you can’t meet your heroes? 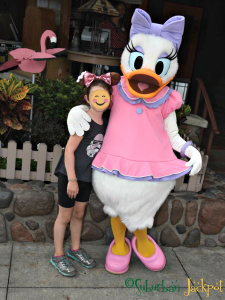 We started in Toy Story Land that morning and walked right past Buzz Lightyear. I almost lost myself, and pointed him out to Miss O, but she wasn’t interested. I guess her bravery with costumed characters was only for Daisy. I think she was more interested in getting breakfast and riding rides at that point anyway.

Olaf was a different story altogether, though. I wasn’t going to push it, but knew how much Miss O loved him. During the wrap up at the Frozen Forever Sing-A-long show, they announced that Olaf would be appearing next door. I casually asked Miss O if she wanted to meet him and her response was at a pitch I could not register. It turned out that Miss O and Mr A couldn’t wait to get in line. Who knew?! They both got a nice warm hug and some great photos. Those photos are especially wonderful to me because Olaf is the only character they met together this trip. Olaf doesn’t sign autographs, but we got a darling “signature” card from the cast member managing the line. Don’t forget to ask for that on the way in.

We had an amazing experience with Miss O and Mr A, her younger cousin, deciding to participate in Trials of the Jedi, which never in a million years did I think Miss O would do. I guess that counts as a character experience, but they don’t do autographs, so even though they both battled Kylo Ren, we didn’t get an autograph. Not to worry, he appears at the Launch Bay along with Chewbacca, BB8 and several Storm Troopers.

As we made our way over to the Launch Bay, I noticed the Disney Junior characters out for their meet and greets. Miss O noticed too, but had zero interest in meeting Jake or Sophia, which sort of made me sad for how quickly she’s growing up.

Once inside the Launch Bay, we looked at the Solo exhibit, which we all enjoyed and started making our way over to meet Chewy and BB8. That is, until Miss O decided she 100% did not want to meet either of them. Wait, what?!?! Not even BB8?! But she loved BB8. Sigh.

I knew there would be some more characters at Characterpalooza later that afternoon, but you never know who is going to appear there and odds were heavily in favor of costumed characters over face characters. Miss O was feeling the weight of a four day Disney experience by then, too, and it showed in how exhausted she looked. We decided to call it quits and headed back to the Art of Animation, our hotel, for some pool and rest time before our second day at Magic Kingdom and our night at Mickey’s Not So Scary Halloween Party.

Even though the day was short, we had a great time and I’ll never forget Miss O’s experience with Daisy. That alone was worth the time in a park I would have otherwise written off. Maybe I’ll get to meet BB8 next time.

If she was serious about finishing her mission to collect all the Disney Princess autographs, we still had a few more to get on our second day of autograph hunting in Magic Kingdom.