Now that I’m out of graduate school, my bandwidth is freaking out looking for anything to do because I must be forgetting to do an assignment about now, right?! Fortunately, our upcoming Disney trip is the perfect outlet. I’m not sure my family agrees with my grad level intensity, but it’s really hard to dial that down when you’ve been steaming along at 1000 mph with six-week intensive courses for two years. 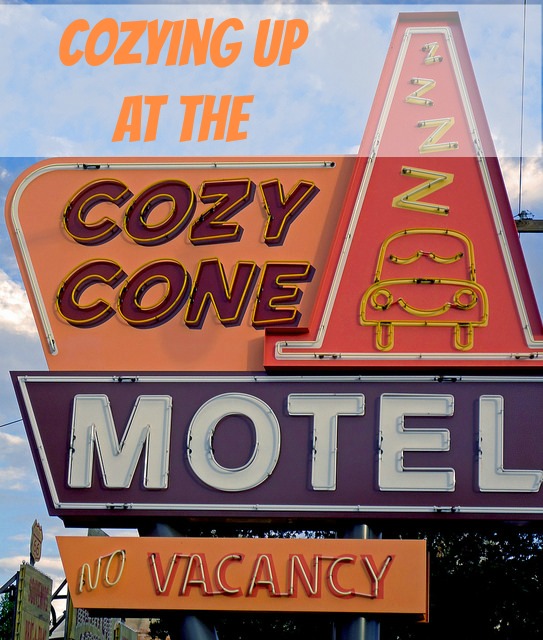 Once we got ourselves sorted on when we wanted to go to Disney, I turned my attention to where to stay. We could have gone a few different ways with our accommodations, and being such a large group, we had a few cool options. There are about 30 hotels on Disney property with different price points, amenities and level of characters-in-your-face. The decision doesn’t get any easier when you’re traveling with seven other opinions, so really, you have to ask yourself, “how much Disney do I really want when I‘m in my room?”

I honestly think you can’t go wrong here, and there are some great perks to staying on property, but you should definitely know your comfort, financial and Disney level. Seriously. Know thyself. I know that I can’t be without indoor plumbing and at least one Starbucks nearby for the morning. I’m not happy in a hostel and I was raised on 4- and 5-star hotels. I’m lucky and I know it. It makes it really hard to travel with me.

Everyone camps like this, right? Photo Credit: Roderick Eime

I’m pretty sure my family has learned to expect this and they don’t exactly rough it everywhere themselves, so I don’t feel this is an entirely difficult discussion to have with them. Who doesn’t like nice things? The trick of it is, can you afford them?

We started by investigating renting a house off property, booking an AirBnB or some of the larger options on property, like the Copper Creek Villas & Cabins at Wilderness Lodge, Jambo House at Animal Kingdom Village and the Polynesian Villas & Bungalows. These were great properties, and will absolutely happen someday, but a little outside our budget. Theming is on-point, but it wasn’t really the Disney level I was going for.

Seriously though, I NEED to stay in one of these. Photo Credit: Sam Howzit

I realized I wanted to have our room scream “WE’RE AT DISNEY!!” every time Miss O walked through the door. A part of me needed to go all-in at least one time for her and these rooms weren’t quite there for me. I needed a bit more characters-in-your-face.

We decided to split up our group and look at the moderate level rooms to give our wallets a bit of a break. I looked at The Port Charles because I adore New Orleans and the French Quarter, but also because The Princess and the Frog is one of my favorite Disney movies. They have a Princess room that puts a little extra Disney in your face and I knew that Miss O would love it. I got a little stuck on those rooms for a while, so I brought that suggestion to the rest of the group.

While we were arguing about discussing the rooms, someone suggested the family suites at Art of Animation. I hadn’t really considered them because, honestly, I can be pretty stubborn and I didn’t really think that property was going to be the experience I was going for. I acquiesced, took a real look, and I have to say, I’m pretty excited about these. The rooms are much bigger than the Port Charles rooms and you definitely get characters IN. YOUR. FACE. I love the idea of having a little family room and a snack area to spread out a bit is a big bonus. They were definitely within our budget, so the only thing left to do was choose which room. That’s no small task when you haven’t told the kids you’re even going. What if we pick the wrong one?!?!

We had a really hard time choosing between the three rooms. Characters, proximity to the pool and shuttle and even how well can we sleep at night all came into play. Miss O adores the Lion King and that room is really amazing, but the pictures of the rooms made Hubs overwhelmed, so we wondered if Miss O might have a hard time focusing in the morning or chilling out at night.

We all love Cars and I was all about the Cozy Cone, until we found out the Cars rooms allow dogs. While Miss O cannot get enough of animals, she doesn’t always do well around them. Personally, the thought of hearing barking at 3 AM does not say vacation to me, nor does Miss O melting down in the hallway because some big dog got friendly without warning, so I regretfully decided not to risk it. 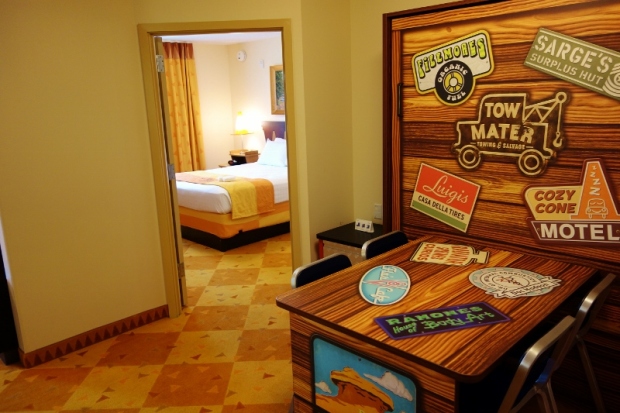 Finding Nemo became our choice, and we’re hoping that the serene blue under-the-sea vibe will keep us in the mood in the mornings and help ease off the stimulation a bit in the evenings. While they are not as themed as the other rooms, they are also closest to the Big Blue Pool and the lobby, so convenience and less walking becomes a big draw. 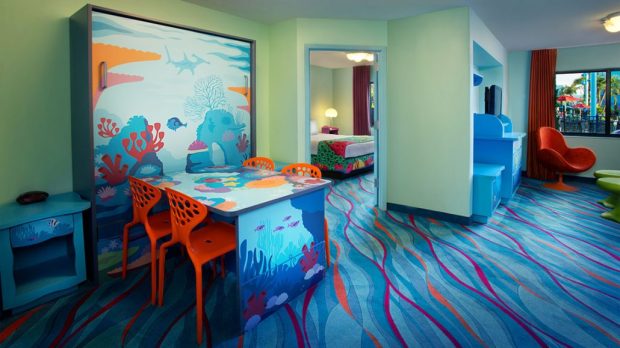 My in-laws chose a “family suite,” but didn’t specify a character, which means they’ll get what’s available, but hope to be in a Lion King Suite so that my nephew Mr. A can camp out with Simba.  GMa and GrandDad will be in a standard Little Mermaid room because they’d like their own room, rather than shack up with one of us, which is completely understandable.  Hopefully we’ll get to see those rooms on our first day when we explore the hotel a bit and try out that pool. 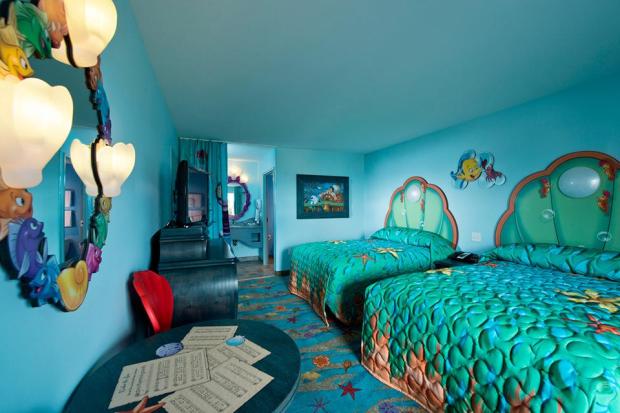 I really don’t think you can go wrong with your choice as long as you stay true to what you want your vacation to look like and be honest with yourself about what you can afford and how much Disney you can handle.

What Disney property is your favorite?

17 thoughts on “Cozying Up in the Cozy Cone”