After we returned from our first family trip to Disney World, I understood why people love it so much they go back year after year. If you’re enjoying your trip as much as we did, you get this indescribable joy. We were positively giddy for days and everything was new, even though Hubs and I had been there so many times before. It wasn’t until I tried to scan my magic band at Trader Joe’s almost a week after returning home that I realized how much I embraced that magic. The return to regular life suddenly seemed so mundane. A few months later it was downright depressing. I really didn’t think it would hit me that hard, but I definitely had been hit with Disney Depression.

It’s a great #firstworldproblem to have, but I wasn’t prepared for how much I missed being at Disney World. At first, I figured it meant I needed that vacation more than I thought. I had been feeling the strain of a stressful software rollout at work that involved lots of communications to write and trainings to plan, but it wasn’t so bad I started looking for another job. It was a busy time, that’s all.

We had been on a family vacation before, tacked on to a family wedding in the UK a few years before, but Miss O was only 16-months old and traveling looked a lot different then. Now we didn’t have a stroller, diapers or even a big bulky car seat that we needed then. This time, her inflatable booster seat fit in my tote bag and she can walk for miles on her own. We’d been on several smaller trips since then to visit friends and family, but Disney is so much…bigger.

About a week before our Disney trip, our beloved cat, Beans, passed away. She was 14 and it was definitely her time, but it hit us all harder than I expected. Miss O is still struggling with it even though she now asks for a dog Every. Single. Day. Hubs and I knew the timing of the trip would help ease the shock, but I don’t think we thought about how empty the house would feel when we returned. Leaving the most magical place on earth to return to a place of sadness is a cold smack to the face. 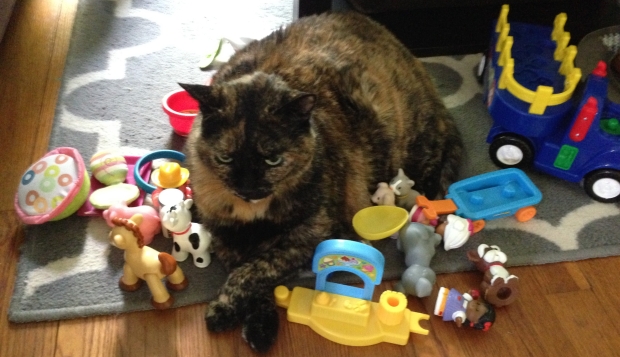 She put up with so much…

It’s been 6-months since our trip and, while it hasn’t snowed much, this New England winter seems extra bleak this year. In that time, Miss O has built myriad versions of Disney World out of her Legos. Her “American Girl” dolls (Target Our Generation girls, but don’t try to correct her, she DOES NOT care) have been Disney travel planners and waited in several lines to meet Princesses. Sometimes she even wears her magic band around the house. Her memories of that trip are strong and they seem to be carrying her through some tough days.

It sounds hokey to say, but we all loved that trip so much more than we expected. It’s the first time in a long time we were truly together. We were enjoying ourselves and our time in the parks, but we were also enjoying watching each other have this amazing shared experience. When Hubs and I lived in Florida, long before we knew each other, we went to Disney World so many times we started to take it for granted. Popping over to Epcot on a day off when you live in Orlando is a lot different than planning a week-long vacation from Boston for a multi-generational family trip. The time and energy invested was intense and the pay-off was absolutely worth it. It’s rare for me to experience that anymore and, as with all things Disney, everything is already leveled-up anyway. It would figure the slump would be equally intense.

Apparently, pounce on an early release promotion for a free dining plan at qualifying Disney World resorts during the same time we went to Disney World last year. Oh yeah, that’s exactly what I did.

We have finally dug ourselves out of two rounds of unemployment that equaled almost three years, huge college and graduate school debt, and struggling to pay a rent which is now a mortgage, to reach what we once thought was a previously unattainable DREAM of a life.

It was so emotional for me to be able to afford it the first time, that I can’t even describe what being able to do it again means to me. We planned hard for this, saved money where we could and learned what it means to live within our means to be able to afford things like this. We actually have a savings account now!

So yeah, we’re going back while Miss O is young enough to enjoy it and we’re young enough to keep up with her.  We’re not throwing caution to the wind or anything. I’m still living off a spreadsheet that tells me exactly what I can spend each month and how much I can save, but we have definitely reached a bonus round here in the Suburban Jackpot.

We haven’t told Miss O yet. We had so much fun surprising her last time that we’re going to do it again. I also think now that she’s been, it’ll be harder for her to wait, so there’s no point telling her yet. It feels different this time, but still good. It’s what I needed to get out of this slump. If anything, at least I’ll be better prepared for the return home this time.